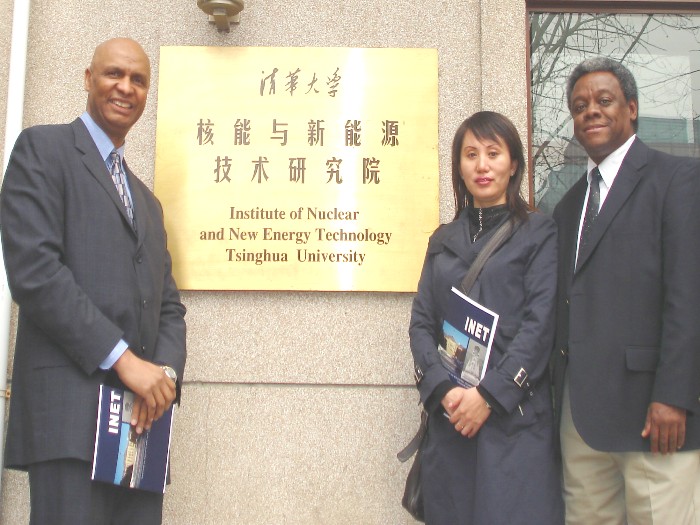 The Center was invited to Tsinghua University by HTR Director Dong Yujie. They presented a compreshensive description of their groundbreaking Pebble Bed Modular Reactor (PBMR). It is the only operational reactor of this type in the world. In the diagram below helium drives the generators In the Tsinghua research reactor the helium heats water in a secondary loop to produce steam to drive the turbine generators.

China plans to patent its own reactors and PBMR will be one of those technologies. China is also working with Westinghouse to develop another third generation nuclear power plant design

The Tsinghua University design is similar to the layout of a pressurized water reactor (PWR). The South African utility Eskom is designing and planning to build a PBMR based on the design above, which is similar to the boiling water reactor (BWR) design. The pebbles that house the uranium or mixed oxide (MOX) fuel are pictured below. Hundreds of thousands of these pebbles make up the reactor core. 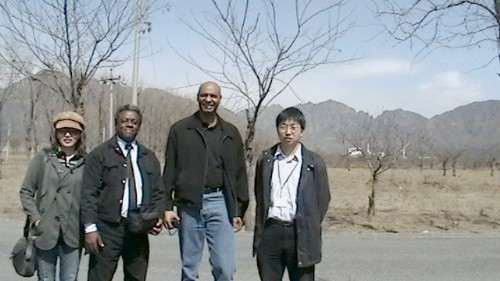 The research reactor is about 50 miles northwest of Beijing near the Tianshou Mountains at the Badaling section of the Great Wall, which is the most popular spot for foreign tourists in China visiting the Wall. You can see part of the Great Wall from the reactor site. The PBMR research site is the white structure to the right and behind Center staff and Dr. Hong in the photo at right.. 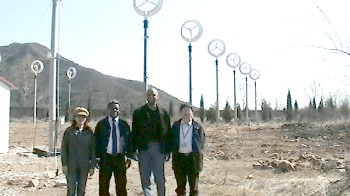 The Tsinghua team was very gracious and allowed us to look around the entire facility.

Tsinghua is now planning to build a demonstration PBMR near Weifang in Shandong Province. A successful demonstration plant will lead directly to commercialization throughout China. There is still some public concern about nuclear power in China. It is apparent by the distance between Tsinghua University and the research reactor. HTR Division staff did not enthusiastically receive a recommendation from the Center to build a demonstration facility on campus to replace the coal plant that provides heat for the university. 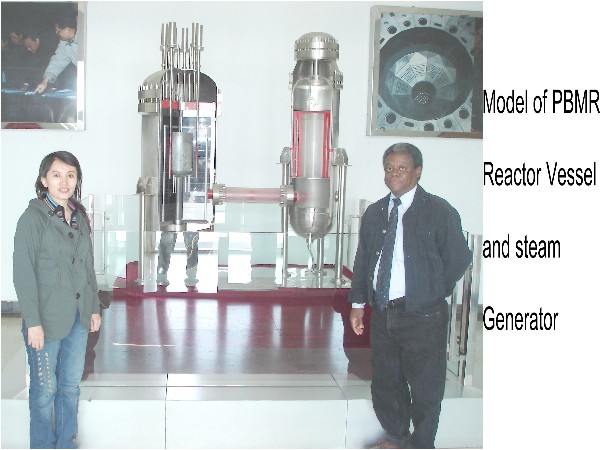 Note the pebbles pictured above. Although this thrid generation reactor has many improved features, managing the spent pebbles will be a challenge. They might just have to be buried in an appropriate geological repository. We prefer reprocessing of spent urainium because 90 percent of the energy remains in the fuel after initial use.

After passing through security gates at the PBMR facility we observed the model in the foyer and then moved to the security entrance. We put shoe covers on and went to the control room.

Tsinghua will conduct another test of the facility later this year while plans are being made to construct the demonstration plant in Shandong Province.

The Center is recommending that China should build at least 400 reactors over the next twenty years. Although this number sounds very large, we believe China has the unique ability to complete such a project. The reactors should be 1,000 megawatts and they should be constructed underground close to urban centers to reduce transmission losses. This Great Nuclear Wall would provide electricity for 400 million homes. As China continues to grow and develop, this should provide sufficient electrical power for all sectors of the society. The side benefits would be reduced greenhouse gas emissions and a reduction in smog forming gases. 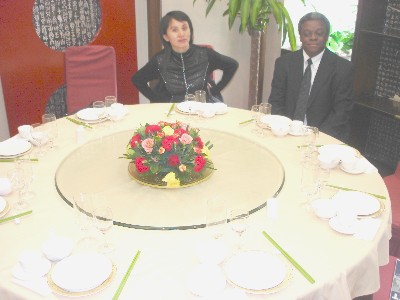 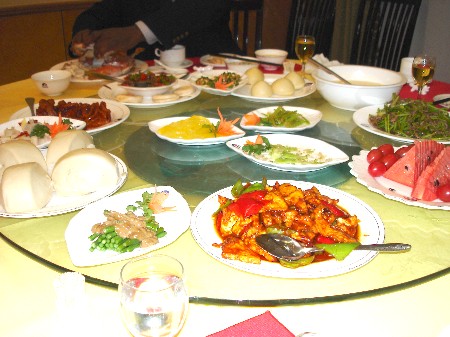 The Tsinghua University INET team gave us a tour of the campus and treated us to marvelous lunches at the faculty cafeterias.

The circling dinner table is a great Chinese innovation. Everyone gets to sample some of the dishes on the table. The lunch also provided everyone with an opportunity to learn a little more about each other outsde of the technical discussions of the presentations and research reactor tour. 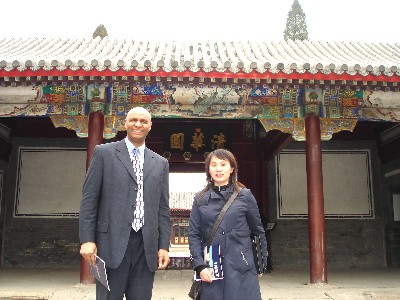 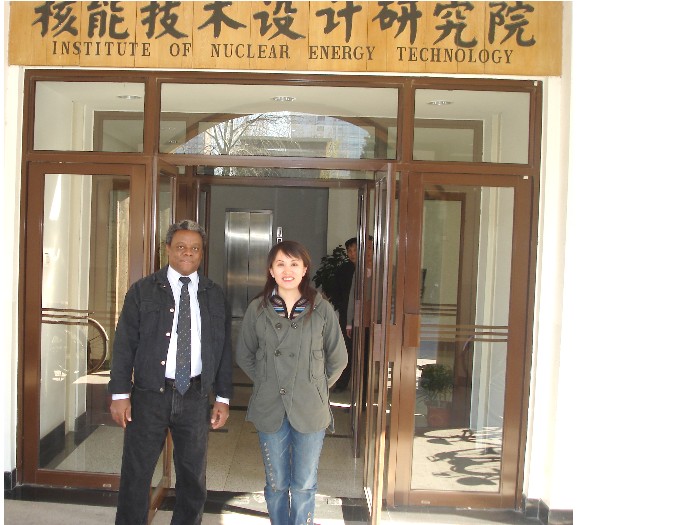 Norris & Xiaoping below Outside of the PBMR Research Reactor Building 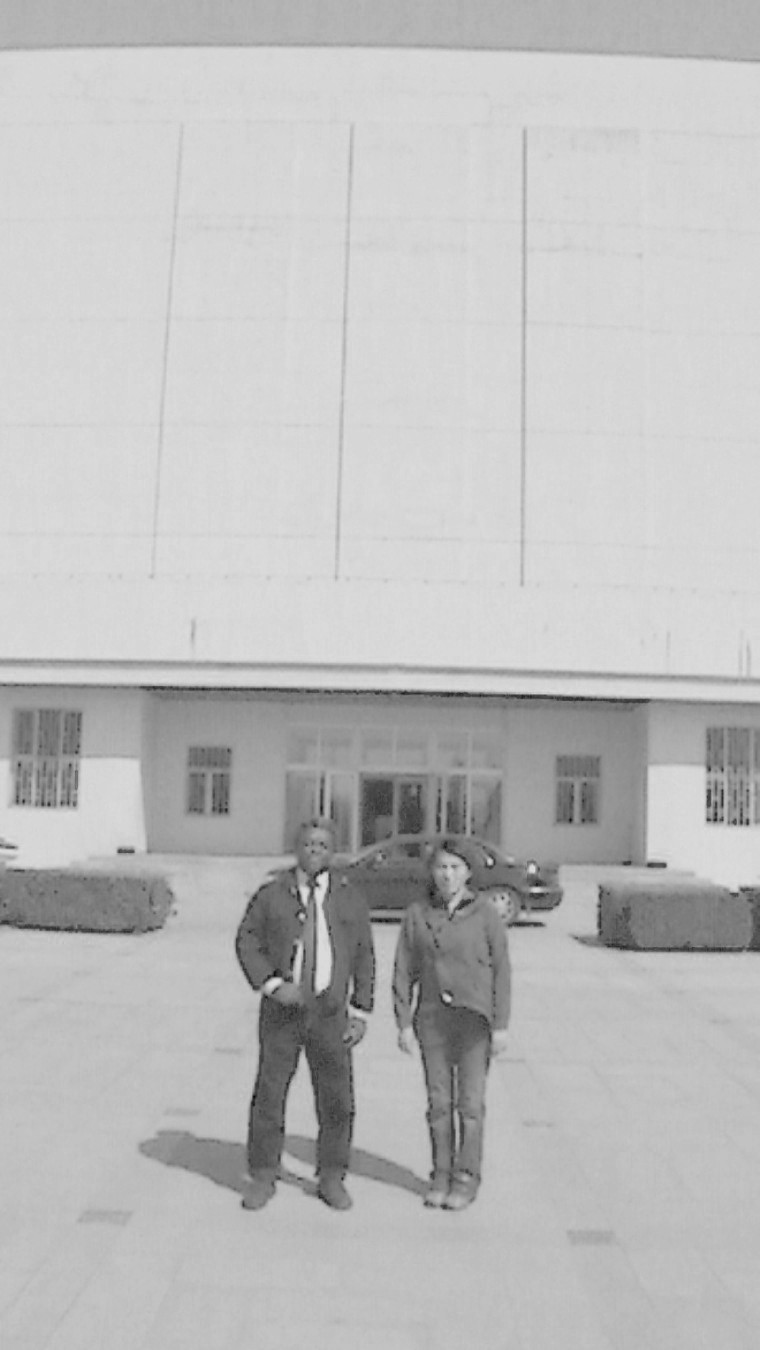